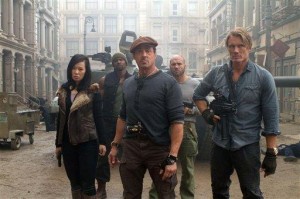 Capping off the summer box office with explosive action, “The Expendables 2” offers the send-off that adrenaline junkies are seeking before the more sedate pace of fall releases. As he proved with the original installment, Sylvester Stallone grasps the action-oriented DNA of the films’ badass cast of reprobate mercenaries with an intuition derived from dozens of genre roles.

Without wasting any time on setup, the sequel finds Barney Ross (Stallone) and his team of hard-bitten mercenaries on a clandestine mission to extract a kidnapped Chinese billionaire in Nepal, where they discover that someone has gotten there before them — Trench (Arnold Schwarzenegger), another operative for their contractor, Mr. Church (Bruce Willis). Freeing Trench and the billionaire from their captors, the team returns to the States, where Church confronts Barney with an unpleasant reminder: The Expendables’ leader owes Church $5 million in confiscated cash from a previous job. But he is prepared to make a deal if Barney takes on a new assignment.

The catch is that he will need to place Church’s operative on his team, Chinese tech expert Maggie (Yu Nan). Since the Expendables are an all-male crew, the addition of a woman almost immediately throws group dynamics out of kilter. Their assignment is to retrieve an undisclosed item from a high-tech electronic safe aboard a downed plane that has crashed in Albania. Although new team member and Afghanistan vet Billy (Liam Hemsworth), an expert sniper, reluctantly tells Barney that this is his last outing, the rest of the Expendables relish another mission, including second-in-command Lee Christmas (Jason Statham) and team members Gunner Jensen (Dolph Lundgren), Toll Road (Randy Couture) and Hale Caesar (Terry Crews).

As soon as Maggie has decoded the safe aboard the crashed plane and extracted the contents, the Expendables are ambushed by an Eastern European crime cartel led by the sadistic Vilain (Jean-Claude Van Damme), who forces Barney to turn over the device from the safe and then kills a key team member. Maggie later reveals that the item stolen by Vilain is a miniature computer containing the location of a five-ton cache of plutonium that the Russians stashed in an abandoned mine during the Cold War.

Motivated as much by revenge as their realigned mission to prevent Vilain from selling the weapons-grade nuclear material to a list of willing buyers, the Expendables take off in pursuit of their adversaries, with Barney’s directive uppermost in their minds: “Track them, find them, kill them.”

While most of the original film’s action transpired in Latin America, Expendables 2 relocates to Bulgaria, which offers appropriately expansive vistas and credible locations for the Eastern European settings. Taking over directing duties from Stallone, Simon West preserves the hardboiled action and wisecracking cast dynamics of the original, channeling some of the B-movie tonal elements he might have picked up directing Con Air. Managing the complexity of stunts, aircraft and vehicle pileups and frequent shootouts that comprise the majority of the running time is a major challenge that West executes with elan, even adding unexpected grace notes to some otherwise routine scenes. Abetted by cinematographer and action-adventure specialist Shelly Johnson, whose camera placement and movement are spot-on, the action choreography never disappoints. Numerous gunfights, combat set pieces and fight scenes are muscularly staged and skillfully supported by Todd E. Miller’s editing, though the sheer sound volume grows repetitive and wearying.

With such an expansive cast, there’s a risk that the quality of performances might be diluted by the quantity of recognizable actors. But co-screenwriter Richard Wenk and Stallone have generously given both major players and cameo actors their own often quite -humorous character traits and dialogue. When Schwarzenegger is onscreen, much of the banter is at the former California governor’s expense — though, much as ever, he gets some memorable lines himself.

Working with a fairly routine action-adventure scenario, the filmmakers can leave the cast to adequately fill out their roles. Since many of the leads have well-known personas from past films and franchises, performances are a blend of action-hero impassivity and sendups of familiar characters. Stallone anchors the cast with a sometimes nuanced interpretation of Barney’s mix of personal and professional demons and plays it straight as a foil to Statham’s put-upon sidekick. A late scene with Van Damme’s suitably sadistic villain shows that Stallone’s still got the charisma to carry an intimately staged fight sequence. Lundgren gets great comic mileage out of Gunner’s lunkheaded character, while Couture and Crews hold down the stalwart combat veterans’ shtick.

Despite key roles, Hemsworth and Yu don’t add much to the ensemble, and Chuck Norris as Booker and Jet Li as Yin Yang appear too briefly to make much impact. Many might wonder about Schwarzenegger’s return to action movies and might be pleased that the brief role of Trench is a perfect fit, adorned with some of the best dialogue in the script. While he’s every bit as creaky as the other vets his age, relying more on very large weapons and cutting humor than unarmed combat, Schwarzenegger still can steal a scene, particularly in the final set piece where he’s paired with Willis, who relies more on smirking threats than decisive action until the final reel.

Pyrotechnic and special effects credits are superior on a reasonable budget, and though the soundtrack would have benefited from a higher ratio of contemporary hits to familiar classics, Brian Tyler’s score carries the action without overwhelming it.