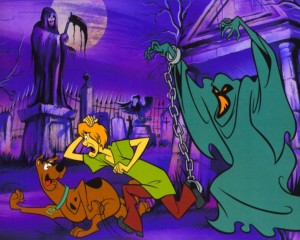 Per Deadline, the as-yet-untitled film, currently set for a straight-to-DVD release, will have a wrestling theme with Scooby-Doo and the gang setting out to solve a mystery at WrestleMania. The site notes that several current wrestling personalities, including WWE owner Vince McMahon and John Cena, will be doing guest voice-overs:

Well, wrestlers are big on wearing masks, and the WWE has lined up its grapplers Triple H, John Cena, Kane, The Miz, Brodus Clay, Santino Marella, Sin Cara, AJ, and WWE chairman/CEO Vince to lend their voices and appear in animated form in the film.

When Shaggy and Scooby win tickets to WrestleMania, the entire gang travels in the Mystery Machine to WWE City to attend the epic event. However, when a mysterious ghostly bear appears and threatens to ruin the show, Scooby, Shaggy, Velma, Daphne and Fred work with WWE Superstars to solve the case.

The statement also notes that the film is currently scheduled for a 2014 release.

Notably, this upcoming Scooby-Doo feature is the first time WWE’s movie division has ventured into animation territory, with all their previous projects being live-action features (although some of the characters in these movies have been so one-dimensional and flimsy, you could easily be mistaken for thinking they were cartoon characters).

Not that the company itself is any stranger to cartoons. Anyone remember Rock ‘n’ Wrestling, an ultra-cheesy Saturday morning cartoon that aired on CBS between 1984 and 1986?