Joe Hollow is not just a filmmaker, he’s a musician and a painter.  His films are not just horror, they’re art and even sexy!  Several years back, he had a strong desire to do his first feature film and with the encouragement from his friend Cleve Hall http://www.bmovienation.com/?p=6561  he took a risk and completely submerged himself into making “Bloodstruck.”

In many of Joe’s films you’ll see familiar faces.  With over a couple decades of experience watch for the tough guy Mark Hanson.  The beautiful horror queens Linnea Quigley and Brinke Stevens.  Debra Lamb not only stars in Joe’s films, but she also is a producer who’s been an influence on Joe.  Watch for two actors we all have seen in many TV series and movies, Tony Todd and Michael Berryman.  Also, in many of Joe’s films are Kane Hodder who has a laundry list of credits and starring in his upcoming “A Blood Story” is Mindy Robinson who kindly did an interview for B-Movie Nation recently  http://www.bmovienation.com/?p=7906

When Joe makes a film he thrives on originality and creativity. We are fortunate that he shared quite a bit with B-Movie Nation about his experiences and films.

Your first film “Bloodstruck” required you to sacrifice a lot and you took on many tasks.  Was it overwhelming, but yet an amazing learning experience?

JOE: Bloodstruck was certainly a big leap. It’s fair to say I dove into filmmaking with both feet first and with high expectations. Taking on all those duties was a learning experience. Film School of sorts. It’s just not possible reaching the level of expectation I had while taking on all those duties. I learned that the hard way but with absolutely no regrets. My first films can be considered my film school.

You mentioned that “Bloodstruck” was a complicated script.  Did that have any effect on your future scripts knowing you’ll be directing them?

JOE: I don’t think so. I find it more complicated converting the ideas into a smart film. Even with music my tendency to write the epic song came naturally in place of the common formula of intro verse chorus verse chorus solo chorus outro. So my songs were rarely 3:30. This was the first challenge as a filmmaker. Finding a way to tell your story inside of 90 minutes without confusing the viewer. That challenge came quick with my 2nd film called THE FAMILY. It was also my first film with bigger talent such as Kane Hodder, Tony Todd and Michael Berryman. When I wrapped the film and looked at the first edit it was over 2 hours. Very hard to chop it down to 90 minutes. A big learning experience for me. 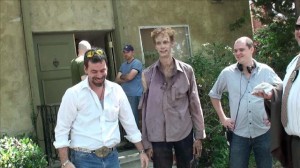 After years of working in the music industry, what inspired you to get into filmmaking?

JOE: Well I’ve always wanted to do film. The thought of taking these visions and bringing them to the big screen was quite surreal. I’ve written over 200 songs. Most of them are deep stories with a lot of layers. So when I first started Bloodstruck it was a music video project that led to obvious bigger things. I shot for 3 days and upon leaving Cleve Hall, known for Monsterman on SyFy who was the FX guy on set had said to me “Joe, you need to continue and reach for the stars because you go it”. When I asked him what he meant he told me that I needed to come back but I need to direct it. He said that I may have had a director for those 3 days but in reality I was directing it from behind the scenes while the hired director went out and relayed my words and direction. So in all truth, Cleve Hall gave me the courage to give it a shot. That led to me raising 100k and filming Bloodstruck.

Is music still a big inspiration for your films and what style of music?

JOE: Well not so much. Music will always be inspirational but as for inspiring the films I have shot I would have to say no. At first with Bloodstruck it was but after that I began scripting with more knowledge in how to actually complete a film with smarts. You have three upcoming films in or soon to be in production.   What’s the status of “Blood Story,” “Disciples,” and “Cannibals”?

JOE: Well actually its 4 films. “The Family” was my first real film and it was picked up this year by ITN Distribution and should hit the shelves very soon. “Disciples” which was next is now submitting for festivals. “The Family” and “Disciples” took some time because again as a beginning filmmaker, you make errors and if you want to do it right you need to fix those errors. I have always put the films first, never me. So being those were my first films they did take some time in post because I wanted them to be right. Disciples will be screened this fall. Very proud of that film. “Blood Story” was just filmed a few months ago. It is now submitting to festivals as well. It moved a lot faster that my first films and it’s all due to experience. It takes time to understand all areas of filmmaking and it takes time to surround yourself with the right people. So in turn “a Blood Story” was shot and complete much faster. Now with “Cannibals”,, we begin filming in November. Its my biggest film to date. It’s one hell of a script. By far the most epic and violent film to date for me. My first films are not as bloody I guess you can say. I never wanted to do anything cheesy. Doing it right comes with experience and I’m not one to do it just to do it. But now the time has come! The special FX being done by the great Robert Hall and Almost Human FX. It’s also the smartest film for me to date. Its my 4th feature film. My 5th if you want to include Bloodstruck which I will release as a retrospect next year. Cannibals also hosts a number of A list actors I can’t mention yet will release through the press over the next couple of months as we approach the month of November. Cannibals also hosts a number of horror favorites in Michael Berryman, Bill Moseley, Kane Hodder, Linnea Quigley, Debra Lamb, Lynn Lowry, Camden Toy and Robert Z’Dar. It’s quite an honor to go into a film of this magnitude. And it’s a pleasure taking this on with my good friend and the extremely talented Debra Lamb who along with David Keeter are executive producers on Cannibals. We have yet to release the A list actors and it already looks like a beast. There is a website at www.cannibalsofficial.com  and a Facebook page at www.facebook.com/cannibalsofficial.

Enjoy more of Joe’s creative world by checking out his website www.joehollow.com