Coming soon a kid tested, mother approved zombie series.   If you’re tired of your kids begging you to watch zombie films, but afraid of them having nightmares or know you’ll be in the doghouse with your spouse, then this series is for you.  It will slowly break them into the zombie world we appreciate and love.   Start them off by having them watch the “Our Zombie Mother NewZ” video with Grace Jeanette.

New start-up series Our Zombie Mother’s pint-sized star, Tyler Griffin, recently made HUGE waves in the horror community when he made his big screen debut as Young Parker in Insidious: Chapter 2!

Tyler has this to say about being on set with James Wan, Patrick Wilson, Rose Byrne, Lin Shaye, Barbara Hershey and all the rest: “It was fun making a lot of friends on set, not just with other actors but with the director and crew and especially the studio teacher. I still had to do my homework too! But the actor that was my best friend on set was probably Lin.”

Not only did Tyler have a super time shooting on location in real creepy old houses, he also got to attend the premiere screening that was recently held in Universal City, Los Angeles, and to sign autographs on the red carpet! Here’s a clip of Tyler and his sister, Naomi Griffin, who also stars in Our Zombie Mother and whose film, A House Is Not A Home, recently won accolades at the Burbank International Film Festival, signing at the premiere:

Tyler had to keep his involvement in Insidious: Chapter 2 a secret for quite some time prior to its release, though, as his role provides the twist in the story’s tale… He was also extremely proud to have appeared in the trailer even if his appearance was only half a second long. You can watch the trailer – and look out for Tyler! – right here:

Tyler plays Jon in Our Zombie Mother who, along with his sister, Wendy – played by Naomi – has to figure out what to do with his mother when, one day, she wakes up as a zombie! His zombie mother is played by Maria Olsen, who, by a strange twist of fate, also auditioned for the role of his mother in Insidious: Chapter 2! Olsen is well known in horror circles, and has recently been seen in The Haunting of Whaley House, Vile, The Lords of Salem, Paranormal Activity 3 and Die-Ner (Get It)? She also appeared on-screen as the flying Fury in Percy Jackson and The Olympians: The Lightning Thief.

Tyler makes friends wherever he goes, but he isn’t afraid to put in some hard work, and he keeps busy with acting classes, coaching, music and scouting too. But, as making the top list of the Most Cutest Boy Actors on IMDB, one might conclude that he has some natural abilities too.

Our Zombie Mother is the brainchild of Patrick Griffin, Tyler and Naomi’s talented dad, and the series is being jointly produced by his company, Griffin Studios LA, and Olsen’s MOnsterworks66. The pilot episode is almost out of post-production, and a number of creepy trailers have been released to give the worldwide zombie army a taste of what is to come:

Our Zombie Mother is a family-friendly zom-com “horromedy” series suitable for zombie lovers ages 10 and up.

And then there’s also OZM NewZ…but that’s a whole other story! 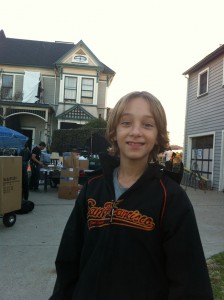 Tyler Griffin of Our Zombie Mother
If you have some thoughts to share about this article or you’d like to discuss B movies with other B movie fans and filmmakers please visit our B Movie Nation Facebook group.