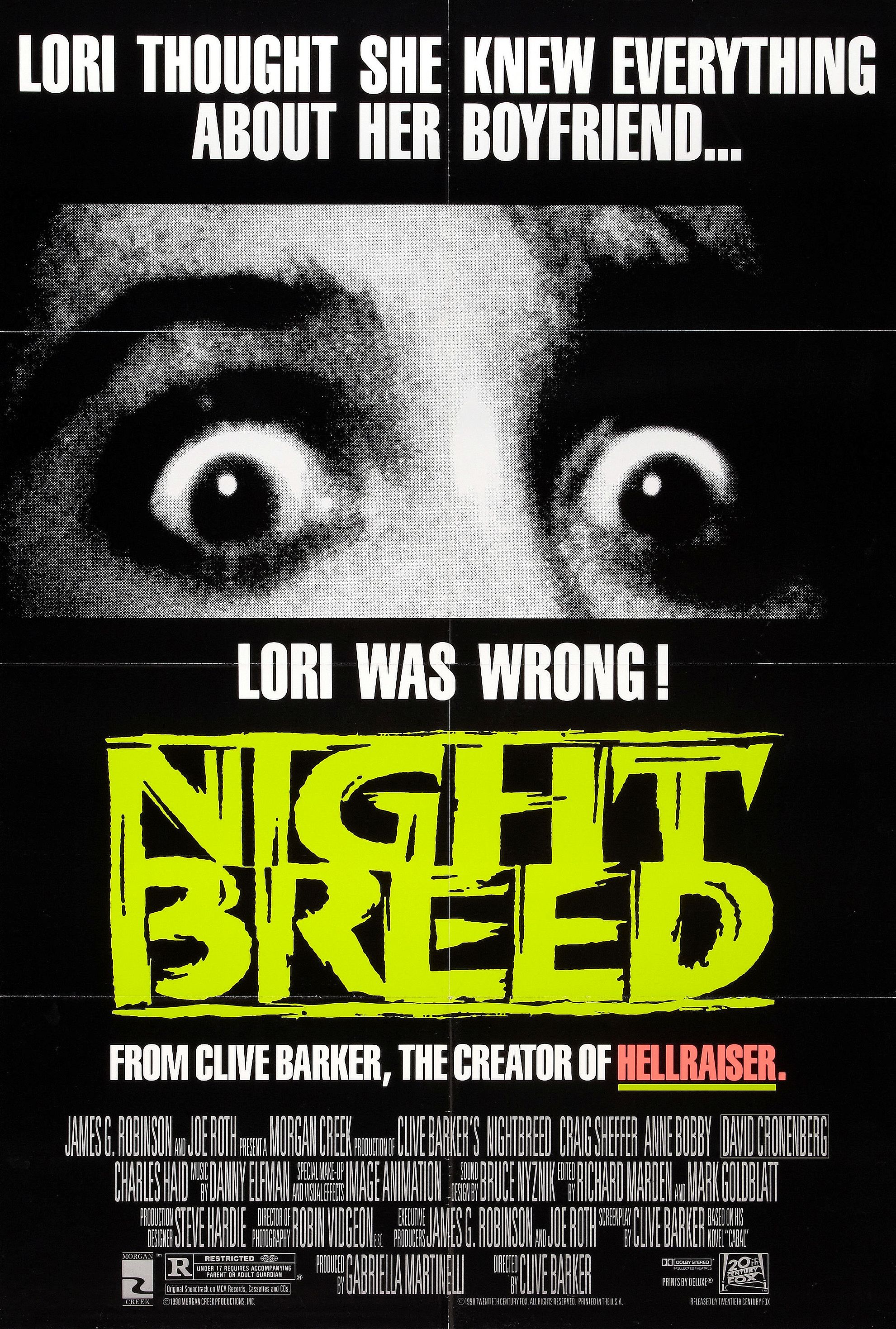 If you’re looking for an original horror flick, this might be the one for you. It’s strange and at times lingers on stupidity, but it’s just such a good looking, nice sounding and original movie, it never fails, except maybe during the over long climax. “Nightbreed” is a must see for horror fans, or for fans of monster movie make-up.

Boone (Craig Sheffer) has been having dreams of a town called Midian full of mutant creatures. In therapy, his psychiatrist Dr. Decker (horror director David Cronenberg) has come to the conclusion that Boone is a murderer, and gives him hallucinogenic pills, and tells him to turn himself in. After almost getting killed, Boone ends up at the hospital, where he runs into a mental patient who also knows about Midian, and tells Boone where to go. Midian, located in a graveyard, is inhabited by vile mutant creatures that don’t let Boone in. After escaping with only a nasty bite, Boone is shot dead by the police, who were lead to his location by Dr. Decker. But Boone isn’t dead. The bite causes him to live, and he goes off to Midian. Meanwhile, Boone’s girlfriend Lori (Anne Bobby) tries to find Boone and get to the bottom of this. When Dr. Decker also finds out about this place, chaos ensues.

The plot seems long and complicated, but it really isn’t hard to understand. The plot, among other things, makes this movie really interesting. The make-up effects are astounding. The creatures look unique and amazing, and make this a very appealing film. To add to more senses appeal, we have a musical score by Danny Elfman, that is both lush and bouncy, and fits the film like a glove. The shots in the movie are also set up beautifully. The cinematography is lovely, and the movie sets up an atmosphere that is never broken. Even the acting is good, with the biggest surprise being director David Cronenberg giving a great, menacing performance as the man, who for one reason or another, wants to see Boone dead. It’s odd for a horror film to be this well done.

The problems with the movie…well there are a few, but the positives outweigh the negatives. The script features the occasional lame jokes to try and add some humor, but almost every one falls flat. The mutant creatures look great and for the most part are well acted, but sometimes it feels like they are just posing their awesome makeup for the camera. The worst part of the film would have to be the climax. It takes so long, and is just constant chaos. It’s the portion of the film that moves from individual characters and nice tight knit shots, to fiery explosions from each direction and violence happening to characters we don’t know or care about.

Overall, this movie is amazing to look at. It’s a well done horror film, but even with that said, it has the occasional failure in character’s lines, and a messy climax. Nonetheless, this is one to check out.