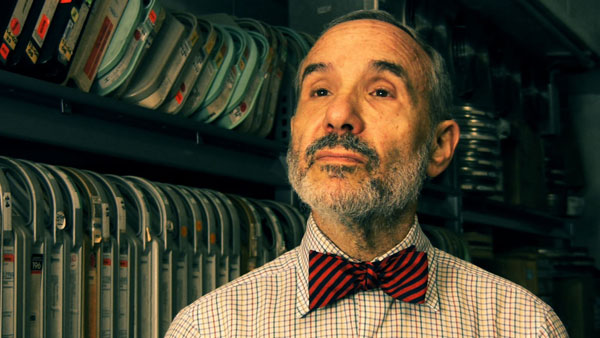 “Troma’s War is a very underrated movie, and it got totally fucked by the MPAA. Richard Heffner, who just made a noise like a frog and was president of the MPAA, told Michael Herz over the phone that our movie stunk. The MPAA is not supposed to do that, and they disemboweled our movie. They took out punches and jokes and things that were perfectly acceptable in movies like Die Hard. I think Heffner’s words were, “No fuckin’ good,” or something. It was very unpleasant…I hope Dr. Heffner burns in hell, quite frankly. And I don’t like to speak ill of the dead, but the nerve, the arrogance, the hubris of his comments! There are very few movies studios that have lasted and remained independent for a long time. And the MPAA is one of the reasons.”
Lloyd Kaufman, On The MPAA

It is a humid June evening in Indianapolis, the main attraction is late and has a thousand people anxiously waiting. Out of the darkness Lloyd Kaufman emerges, climbs onto the stage and generously entertains the audience, some of who have been waiting for more than two hours. Accompanying him on stage is his wife, Pat Swinney Kaufman, former New State Film Commissioner and of course a mop toting Toxic Avenger. Kaufman engages the audience and proceeds to earn a standing ovation. He does not charge for this engagement nor does he expect VIP treatment….his concern is solely is for his fans.

The “star” attraction arrives and seeing the audience erupting into a standing ovation for Kaufman, does a 360 and steams back to his green room. Kaufman is a tough act to follow on more than one level. The irony is that this director has been following Kaufman in many ways since the advent of his career. Most people, most even headed people, would have been grateful for the gift that Kaufman was presenting him with.

Kaufman, a native of New York graduated from Yale University with the class of 1968, where he majored in Chinese studies. His other notable fellow Yale classmates included childhood friend Oliver Stone and George W. Bush. Originally intending to become a social worker, he launched into friendships with student filmmakers Robert Edelstein and Eric Sherman , who introduced him to his soon to be mistress, cinema. Kaufman began to discover the works of John Ford, Kenji Mizoguchi, Ernst Lubitsch, Stan Brakhage and Franklin Schaffner. He also discovered a passion and an appreciation for British surreal comedy, as presented by troupes such as Monty Python.

Kaufman would later translate that approach to comedy into an American perspective with films like The Toxic Avenger.

After a stint in Chad with the Peace Corp , Kaufman produced Robert Edelstein’s low-budget film Rappaccini and then directed his own first feature film, an experimental black and white film titled The Girl Who Returned. The film was presented at film societies at both Yale and Harvard, Immediately following his graduation from Yale, Kaufman went on to work for Cannon Films, where he began a lifelong friendship with John G. Avildsen ( Academy Award-winning director of Rocky and The Karate Kid). The two toiled for several years, making low-budget films including critically acclaimed Joe starring Peter Boyle and Cry Uncle! During this period Kaufman made his second feature film, The Battle of Love’s Return, which earned glowing reviews in The New York Times. During this time he also wrote and produced the thriller Sugar Cookies (with Oliver Stone), and then went on to direct the Israeli comedy film, Big Gus, What’s the Fuss? That film did not do so well. Kaufman, by that time an old New York film hand , worked on Saturday Night Fever.

In 1974, Kaufman and business partner Michael Herz founded Troma Entertainment. The two began producing and distributing independent action and comedy films. For years Kaufman has claimed that Troma comes from the Greek meaning Excellence in Celluloid, others, myself included, feel that the name derived from combination of the words TRagedy, cOMedy, and draMA.

In order to pay the bills, Kaufman did freelance work for major Hollywood productions, including Rocky, Saturday Night Fever, and The Final Countdown. From 1979 to 1981, the Herz and Kaufman wrote, produced and directed a series of sexploitation comedies including Squeeze Play!, Waitress!, Stuck on You! and The First Turn-On!. On all these films Kaufman took credit under the name Samuel Weil.

In 1985, Troma launched itself into the mainstream with the making of the violent, darkly comic superhero film The Toxic Avenger. Toxic went on to become Troma’s most popular movie, spawning numerous sequels, a Saturday morning children’s television show, comic books, and a few lucrative merchandising deals. This twisted revisiting of a classic comic series pre-dated the tent pole monstrosities of today and revealed Kaufman as a pioneering maverick for scores of aspiring independent filmmakers. Soon Kaufman’s office in Hell’s Kitchen began a magnet for young filmmakers. The flocked to him, sensing the spirit and the freedom to develop their own cinematic voice.

Class of Nuke ‘Em High, followed The Toxic Avenger which he co-directed with Richard W. Haines. Riding on the success of the Toxic Avenger. Nuke ’em inspired two sequels. When Troma’s War was manhandled by the MPAA by their refusal to grant the film a “R” rating Troma’s day in the sun began to wane. The MPAA effectively denied Troma access to the theatres, markets it needed to ensure it’s survival.

The the decline of the VHS business as well as the increasing trend of media monopolization, Troma began to struggle financially.

From 1995 to 2000, Kaufman re-imagined Troma into a truly independent film company, drawing its success from within the wide base cult movie fans and critics with films like independent film Tromeo and Juliet (1996), a loose parody of Shakespeare’s play as well as Terror Firmer (1999), a slasher film set on the set of a Troma movie , and of course Avenger franchise Citizen Toxie: The Toxic Avenger IV .

The market was changing, independents were falling by the wayside by the wake created by big media consolidation. Kaufman increasingly concerned with the growing vertical integration plaguing all aspects of the film industry in 1999 founded the TromaDance Film Festival in Park City, Utah, now in its 16th year (www.tromadance.com). The purpose behind the festival was to shine a light on the narrowing of the film market and the quieting of the independent cinematic voice in America.

Kaufman began to advocate against the media conglomerates and pushed forward positions on subjects like net neutrality, hoping to begin a discussion towards the making a more democratic media in America. From 2007 to 2011 Kaufman served as Chairman of the International Television and Film Alliance. From the position , Kaufman was able to push forward his positions for a free and open internet and copyright reform.

In his own words “We as a country cannot stand idly by and allow this infringement of our First Amendment rights to take place. The conglomerates have taken over newspapers, movies, music, books, television and more. The internet is the last frontier where everybody can present content on an equal playing field, an oasis of ideas that exists among the parched landscape of old media. If we allow the conspiracy of the labor elites, corporate elites and bureaucratic elites to control cyberspace, it will be the final nail in the coffin of free expression in the media.”. -Lloyd Kaufman

Kaufman’s leadership prompted the enforcing of net neutrality and has begun to make the large telecommunications concerns accountability to the American public.

He also agrees to appear , often free of charge in numerous independent productions in order to support and promote the idea of an independent cinemas.

In 2013, Troma premiered Return to Class of Nuke ‘Em High Vol.1 (2013) at the Cannes Film Festival.
The Museum of Modern Art selected Return to Nuke ‘Em High: Vol. 1 as part of its prestigious “Contenders” series – a collection of influential, innovative films made in the previous 12 months that are believed will stand the test of time – honoring Kaufman alongside other film titans like David Lynch, Woody Allen, the Coen Brothers, and Sofia Coppola.

During that night in Indianapolis, Kaufman and his wife Pat sat patiently through the film screening. During a Q and A session following, the director was asked about the influence of Troma on his work, seeing Kaufman in the audience, the filmmaker could have graciously acknowledged the industry’s debt to Kaufman, but instead chose to ignore Kaufman’s presence almost petulantly.

I was bothered by this, I really do think it is time that we as filmmakers and film goers should follow the example given by audience in Indianapolis in that hot June night, stand up and give Lloyd Kaufman a well deserved standing ovation.