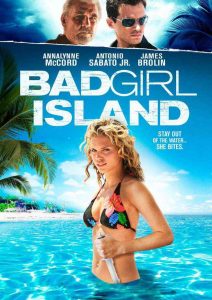 One morning while jogging on the beach a young man by the name of “Michael Pace” (Antonio Sabato Jr.) sees the body of a young woman unconscious and floating in the water. He rushes in and carries her to his large beach house and immediately summons a doctor and the local police. Although she remains unconscious the doctor gives her a clean bill of health and recommends that she remains there for the time being to rest and recuperate. When she finally awakens she suffers from apparent amnesia and doesn’t recall her name. However, that doesn’t stop Michael from becoming totally enamored with her and as a result they eventually end up sleeping together. But then he wakes up and realizes that it was all a dream. And the fact that it was all so vivid spurs him to produce a movie about it and as luck would have it the exact woman of his dreams comes to audition for the film. Unfortunately, there is much more about this woman than meets the eye and his dream soon turns into a terrible nightmare with catastrophic consequences for him and those he loves. Now rather than reveal any more I will just say that this film had an interesting plot, a scenic location and a couple of attractive actresses in AnnaLynne McCord (as “Simone Delacroix”) and Joanna Bacalso (“Sherry Pace”). Unfortunately, the complete lack of suspense and the obvious shoestring budget really hurt this movie and left me somewhat disappointed overall. Slightly below average.