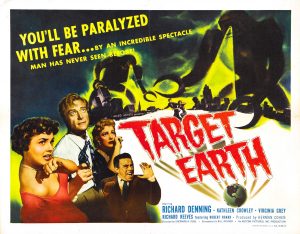 Four people (Denning, Crowley, Grey, and Reeves) meet by accident on the streets of a city that has been emptied overnight of people, except for a few dead bodies. They learn from a newspaper that the city has been invaded and evacuated by everyone else. The cars have been disabled, so the four refugees hole up in the suite of a hotel, making do with candles, beer, and canned food. There WAS a fifth member of the group, a witless little character, but he ran out into the street and was rayed to death by a wandering robot. The invading army, as it turns out, consists entirely of these robots with their death rays. They’re impervious to bullets and can destroy airplanes, presumably with the same rays. A gun-toting evil murderer invades the hotel sanctuary of the survivors and puts moves on Crowley (who has fallen in love with Denning after knowing him for only a few hours). The resulting fight sees Grey killed and Denning wounded before the burly Reeves manages to strangle the killer.

The scenes of the survivors are inter cut with scenes of the requisite military and scientists trying just as hard as they can to devise a means of disabling these robots. They finally succeed — surprise! When the robot army is exposed to sound waves of a certain frequency, it “cracks their cathode ray tubes.” (Your television set is a cathode ray tube.) The army comes to the rescue at the last moment, too late, alas, to save Reeves but soon enough to whisk off Denning and Crowley.

A cheap and boring movie, I found it almost impossible to watch. Well, sometimes the cheapness can’t be helped. A budget will stretch only so far, as we all must know. But this thing could have been written and acted by members of the robot army, who look like they’re made of Lego’s or like unusually angular Gorts, although we only see one of them at a time.

The dialog sucks. The plot is unoriginal. The special effects might better have been suggested than put on display. The logic of the plot is terribly flawed and the direction careless. (Carefully pruned, it might have been a decent episode of The Outer Limits.) I’ll give just one example of a jarring lapse of common sense. The vicious murderer is holding the others at gunpoint and Grey suddenly remembers where she saw him before. He’s the guy that murdered that hooker on Skid Row! That’s right, admits the evildoer. His picture was all over the papers. They’ll be looking for him on every street corner, Denning observes. Not if I slip out through the sewers and get out behind the enemy lines, the murderer sneers. The entire city has been evacuated and is now occupied by indestructible robots who kill people and repulse the military with unknown rays — yet they’ll be watching every street corner for some nobody who killed a hooker! Santa Clause could waltz past the army without interference under these conditions! Well, another example. At the very beginning, Crowley wakes up to find the city empty and she wanders the streets. She stumbles across a dead body and Richard Denning at roughly the same time. They introduce themselves and explain where they spent the previous night. Minutes of frippery go by while neither asks the question: WHAT HAPPENED? It could have been good, even with the inexpensive sets and the second-tier (but seasoned) actors. As it is, it’s rather a painful experience except for those who really enjoy cheesy SF movies, and there seem to be legions of those.