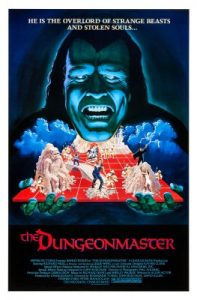 Watching it today, it does seem a bit clunky and dated, but the special effects remain quite impressive considering the technology and budget the filmmakers had to work with. There is a lot of imagination at play here, and it’s delightful to watch each of the segments unfold. John Buechler’s undead make-up in the “Demons Of The Dead” segment is particularly excellent, and his lord of that underworld is a great piece of puppetry. People who watch a film like this and criticize the execution of such a prop are obviously forgetting that even Yoda looked like what he a was, a rubber puppet, until George Lucas spent millions of dollars digitally enhancing his effects.

Though most of the segments fall squarely into the realm of Fantasy, the “Slasher” and “Ice” pieces are great nods to classic horror sub-genres. The brevity of each segment keeps the film moving along at a brisk pace, and no matter how engrossed you become in one piece of the film, you’re assured that there’s going to be something interesting around the corner as well.

Enough can not be said about the greatness of Richard Moll’s performance as Mestema. Moll is a joy to watch, and he seems to take great delight in chewing up the scenery and delivering the surprisingly strong dialogue he is fed. His “cat” speech is a classic, and I can’t imagine a better character or actor to deliver such a great piece of wickedness. Sparring against him, our Paul Bradford makes a fine hero, and the verbal interplay between the two of them is well written and executed.

One thing I haven’t heard mentioned extensively is the music in the film, which is uniformly great. It’s unlikely that a soundtrack ever circulated, but upon re-watching this, I found myself plotting my own transfer of the audio to CD. Of course, a strong number by W.A.S.P. (“Tormentor”, which appears on their self-titled debut LP) helps in that regard. But, even without it, the score alone would make for excellent listening should anyone ever have the foresight to rescue this film and its supplements from obscurity.

It seems so petty to overtly criticize a film that never tries to be anything more than an enjoyable way to spend 80 minutes. To that end, The Dungeonmaster succeeds magnificently. The 80’s was a time when films like this flourished, and comparatively, this is far more professionally made and creatively executed than the overwhelmingly poor caliber of direct-to-video fare we are subjected to these days.

DVDs are cheap to produce and release, and because of this, there are a lot of truly unwatchable films in circulation that deserve to languish in the scarce VHS-only netherworld The Dungeonmaster currently occupies. In fact, if I could pick one film to be plucked from the past and given a loving DVD remaster, it would probably be this one, and its digital absence is one of the only reasons I still have a VCR.

Anyone familiar and comfortable with this sort of material will have a hell of a lot of fun watching this film. After all, that’s ultimately the point of The Dungeonmaster, so it shouldn’t be graded or scrutinized with the same stringent detail we apply to “serious” or “important” cinema. Those looking for thought-provoking social discourse, breathtaking cinematography, or Oscar-caliber performances will hate this film, and that’s okay, because they aren’t the demographic for The Dungeonmaster.

However, for anyone who enjoys the giddy pleasure of a well-constructed B-movie, The Dungeonmaster is well worth seeking out. If that’s you, then prepare for battle, Excalibrate. Mestema awaits you.