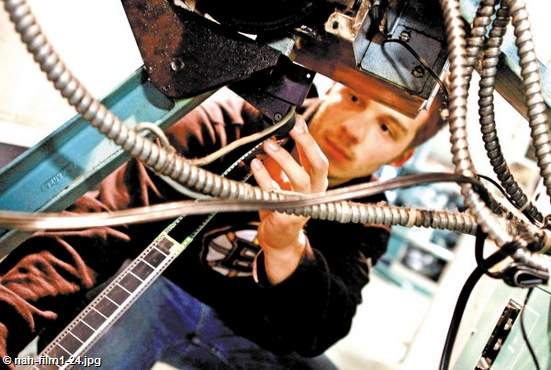 Four times a day, about two miles of 35mm film runs through each of the ten projectors at Flagship Cinemas in New Bedford.

Every projector has its own personality and quirks. For example, Theater Nine’s projector has a distinct squeak in one of its film rollers. Theater Four’s 2,000-watt xenon bulb needs to be manually ignited at the start of every show.

Twenty-year-old projectionist Tyler Chasse is accustomed to these nuances. He operates the projection booth and ensures a flawless presentation for each and every show — all the while sitting at a table made out of a door, hunched over his biology textbook studying mitosis. “This isn’t even my major,” complains Chasse, a liberal arts major at UMass Dartmouth.

There are many part time jobs a student might have while in college: working in a coffeehouse, or being a cashier in a music store. But one of the rarest jobs is that of movie projectionist. A typical movie theater might have one full-time projectionist and maybe two or three part-timers, often college students.

Chasse has been employed as a part-time projectionist at Flagship Cinemas in New Bedford for over three years, and, as he explains, “It is the perfect job for a college student. I have about two hours of downtime between sets of shows to get a lot of school work done.”

UMass Dartmouth grad Greg Andree, who now teaches English at Old Rochester Regional Junior High, served as a projectionist of the AMC Theater at Dartmouth Mall and the now-defunct Cinema 140 in New Bedford. He concurs with Chasse, noting, “The job offered nothing but benefits.” Andree equates the projection booth to a monastery. And he enjoyed working in the “silent contemplation” the position offered. “There were no distractions in the booth,” he says. “The work was mindless enough that you could be deeply thinking and focused on your school work. You didn’t have to deal with customers or other workers because you were the only worker up there.”

Andree worked as a full-time projectionist while earning his bachelor’s at Bridgewater State, “I had to work full-time because I didn’t have a mom or dad paying for college.”

The one to two hours between shows provided him ample time to write a paper for school or read the four to five books he was assigned every week. “I can’t even imagine getting through college with any other job working full-time,” Andree says.

Both Chasse and Andree mentioned the perks that came with the job, like those depicted in the 1970 low-budget movie “The Projectionist.” In that film, the main character would sit and converse with employees, watch movies for free, and not pay for concession candy.

While college students view this line of work as a dream job, the reality is the era of the projectionist is rapidly coming to a close.

Since the birth of motion pictures, operating a movie projector has required manual labor to thread film through the projectors, along with knowledge of mechanics and sound engineering to maintain the projectors and sound system.

This responsibility remained unchanged for over a century, but by the mid-2000’s the arrival of digital projection ensured the days of building up reels of 35mm prints, oiling gears, and taking catnaps between shows were numbered.

To operate a digital projector, all that’s required is pushing a button through a computerized server, so having a theater employing a projectionist to man the booth will no longer be needed. Soon, the profession of movie projectionist will be rendered obsolete, much like typesetters and switchboard operators.

Locally, the AMC Theater at Dartmouth Mall and National Amusements’ Providence Place 16 have recently changed over from analog to digital presentation, while Regal Cinema’s Swansea Stadium 12 is in the process of converting its projectors to digital.

Flagship Cinemas still presents films in 35mm on 10 of its 12 screens, but rumors circulate that more digital projectors are on the way.

So what does this mean for Tyler Chasse?

Though Flagship still employs projectionists for now, the volatile nature of the movie theater industry brings an air of uncertainty to Chasse.

But he remains upbeat,

“I have a couple of jobs on the back burner and keep a Plan B just in case any new jobs open up. But there’ll be no job like this one. I would definitely miss it.”