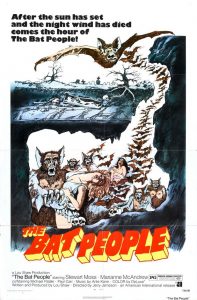 Dr. John Beck (Stewart Moss) and his lovely wife Cathy (Marranne McAndrew) fell into an underground cave. When his wife was attacked by a bat, he tried to help her but he ended up getting bitten instead. Beck thought the scratch was nothing until he found himself having horrible nightmares. He slowly turned into a bat creature! Beck began attacking innocent people for blood. The only one who could talk some sense to him was his wife.

Directed by Jerry Jameson (Airport ’77, Raise the Titanic) made a watchable but disjointed horror film that attempts to be truly scary but fails. Moss gives a good performance and there’s early make-up effects work by the late five time Oscar-Winner,Stan Winston (Jurassic Park Trilogy, Aliens, Interview with an Vampire).

The DVD is a double feature with “The Beast Within” from MGM. Although i think “The Beast Within” is a much better movie in my opinion.The DVD has a good anamorphic Widescreen (1.85:1) transfer and a decent Dolby Stereo 2.0 Surround Sound. “The Bat People” is a truly forgotten horror film. It is probably only notable for make-up effects for fans to see Winston’s early f/x work. Michael Pataki has some fun as a slightly sleazy sheriff. Badly written and produced by Lou Shaw.