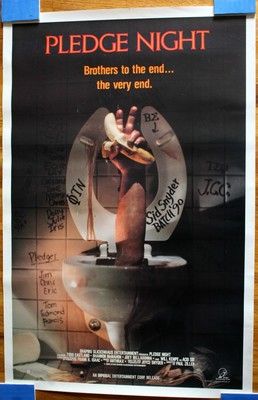 The producers Shapiro/Glickenhaus, who were also responsible for one of my all time-trash favorites (Frank Henenlotter´s “Frankenhooker”) made another “Friday”-rip off possible, which is better than most of the reviews say about it (What does not mean that “Pledge Night” is a good film!)…

The story is about a sadistic student´s establishment-ritual, where the newcomers have to drink from toilets or get branded… (That´s the first half of the film..!). One night however the monstrous Acid Sid, who looks like Alice Cooper with a cauterized face, returns and starts to take bitter revenge, because the trick they played on him about twenty years ago has been a little bit too deadly!

Probably the most interesting fact is that Joe Belladonna, former vocalist of the US-Speed Metal-Band Anthrax, has a small role. The rest is business as usual: some dumb youths get killed one by one, just with the difference that you mostly don´t see the murder, only the results… The most grotesque death is when a guy is strangulated by a spine.

It´s okay to watch “Pledge Night” one time, if you haven´t seen it you won´t miss anything!