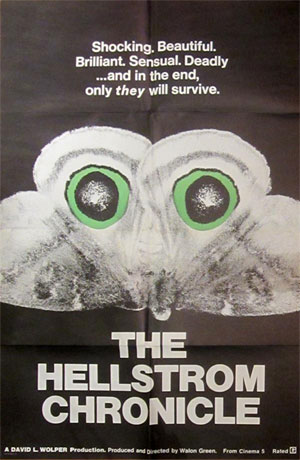 The Hellstrom Chronicle is a documentary about insects wrapped within a fiction. Visually it’s incredibly stunning, very similar to Microcosmos in its “how did they get that shot?” camerawork. The film is narrated by a fictional scientist who claims that the final two lifeforms on earth will be man and insect, and when they face off man will lose. This places a very ominous slant on the action, and instead of Microcosmos’s wonderment at nature we are treated with Hellstrom’s dire dissertation on the various advantages insects have over humans. The voiceovers are hilariously over the top, and the musical accompaniment is splendid in its portent of doom. The movie does tip its hand with an obviously set up hidden camera segment 3/4 of the way through, though the knowledge that Hellstrom is a fiction doesn’t diminish the drama. By the end I actually appreciated the kooky construction, which gave the filmmakers a rationalization to deal with some of the harsher aspects of insect life.