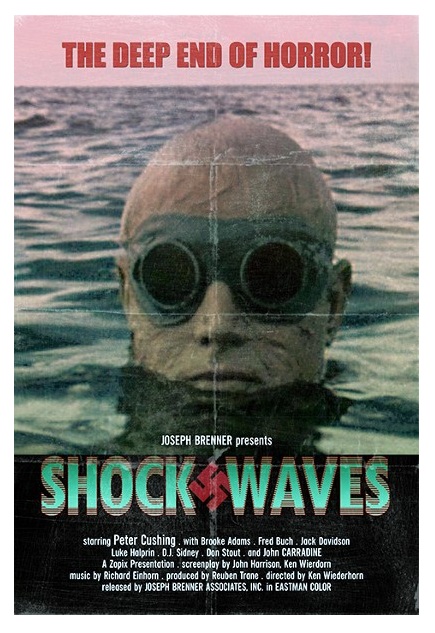 Considered by genre fans to be the best of the “Nazi zombie” sub genre, “Shock Waves” is a thickly and palpably atmospheric horror film with enough spooky and creepy moments and images to make it very satisfying viewing. Co-written & directed by Ken Wiederhorn (“Return of the Living Dead Part II”), it’s got a mostly unfamiliar cast, eerie music by Richard Einhorn, impressive makeup by Alan Ormsby, and some striking Florida location work.

The idea is that the SS attempted to create the ultimate warrior during WWII. So they came up with the Death Corps, which have quietly been hidden away on an island for many years, accompanied by their protector of sorts, an unnamed commander (the great Peter Cushing). Into their realm stumble some people who were on a pleasure cruise, and wrecked their boat after colliding into a phantom freighter.

“Shock Waves” has a lot going for it. It’s got a perfect “late show” feel, always an asset in this viewers’ humble opinion. It would play very well on a TV set in the wee hours of the morning. It has the kind of weird but compelling lack of logic to be found in any nightmare. The bit players in the roles of The Death Corps are very chilling in their unspeaking menace, and the scenes where they rise from their watery rest are always extremely effective. The cast is very good, although one of the intended victims is a complainer named Norman (Jack Davidson). You watch this just hoping that he will get his. The lovely and appealing Brooke Adams has her first major feature film role, and she rocks a yellow bikini in a few scenes. Luke Halpin of ‘Flipper’ fame is engaging as the studly hero. And John Carradine adds his expertise as the crusty skipper; his reading of one line is pretty damn funny.