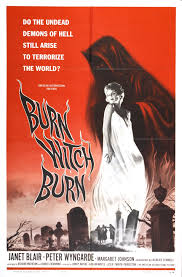 Norman Taylor (Peter Wyngarde) is a successful young professor, married with Tansy Taylor (Janet Blair). He is a very skeptical man, while his wife believes in magic and witchcraft. One day, he finds lots of amulets and witchcraft in his house, and he decides to destroy all of them. His wife gets scared and advises him that he destroyed all the protection their home and lives had against the evil of envious and wicked persons, including some of his colleagues. Norman in principle does not have faith in her, but many strange events happen with him, and he changes his mind.

This English black & white low budget production is one of the most frightening movies I have ever watched. With a great direction, excellent cast having a superb performance and a tight screenplay, this movie may be considered a classic in the genre. Highly recommended for fans of horror movies, in Brazil it is only available on cable television, since Brazilian distributors have not released on VHS or DVD.