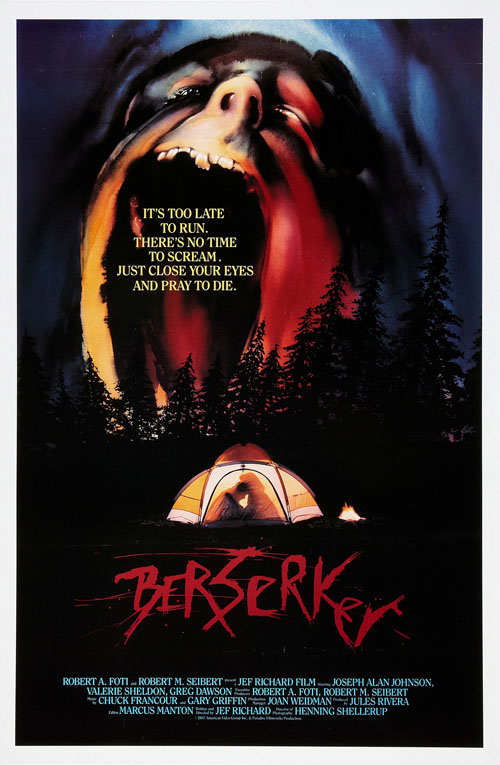 BERSERKER is not the worst backwoods slasher ever made. Films like DON’T GO IN THE WOODS make BERSERKER look like a work of genius. The script is really terrible though and whatever they tried to do was, in the end, completely nullified by the badly written story. The idea of having a Viking mythical being behind the killings is original BUT when the killer wrestles with a bear during the end of the film, and the bear wins, well, how scary does the Viking monster look like? (the Viking killer looks like a WWE wrestler, btw).

The folks behind BERSERKER tried to do something slightly different and that part is commendable. For example, the ending happens in daytime, which is different than the 99.9% of slashers made up to now. And the best part of the movie happens when the killing starts, which is intercut with sex scenes. That whole moment, until the two girls are found dead, is pretty good and creepy. It’s the film’s best moment. But like I’ve said before, all attempts by the filmmakers of trying to do something different were rendered useless because the conclusion of the story is a howler, the acting is sometimes poor (even if the cast is game), and some scenes just don’t make any sense, like when the girl leaves the cabin (it’s night time) to take a pee and she seemingly walks miles away from the cabin to do this and can’t find her way back. How stupid!