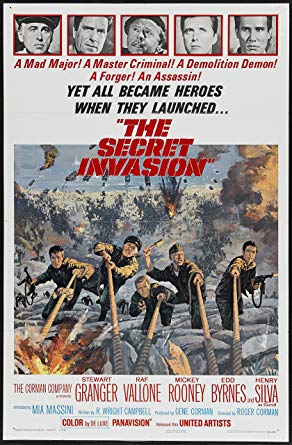 Although producer/director Roger Corman is known for his “economical” pictures, this World War II actioner belies its $600,000 budget (small by conventional Hollywood standards, but an epic for Corman) and is a well-acted, tightly directed, enjoyable not-quite-so-little picture. The story of a group of misfit Allied soldiers sent to rescue an important Italian general who has been imprisoned by the Nazis, Corman makes good use of the Dubrovnik, Yugoslavia, locations and a cast consisting of much better actors then he usually got, especially Mickey Rooney, Stewart Granger and Henry Silva (in an outstanding performance as a taciturn, deadly killer who isn’t quite as cold-blooded as he seems). Even Edd Byrnes is far less annoying than usual, and turns in a good job. The action scenes are very well handled, the picture looks much more expensive than its budget would indicate, and it actually garnered some of the best reviews of Corman’s career up to that time, and deservedly so. It’s a good one (and compares favorably to “The Dirty Dozen,” which it preceded). Check it out.