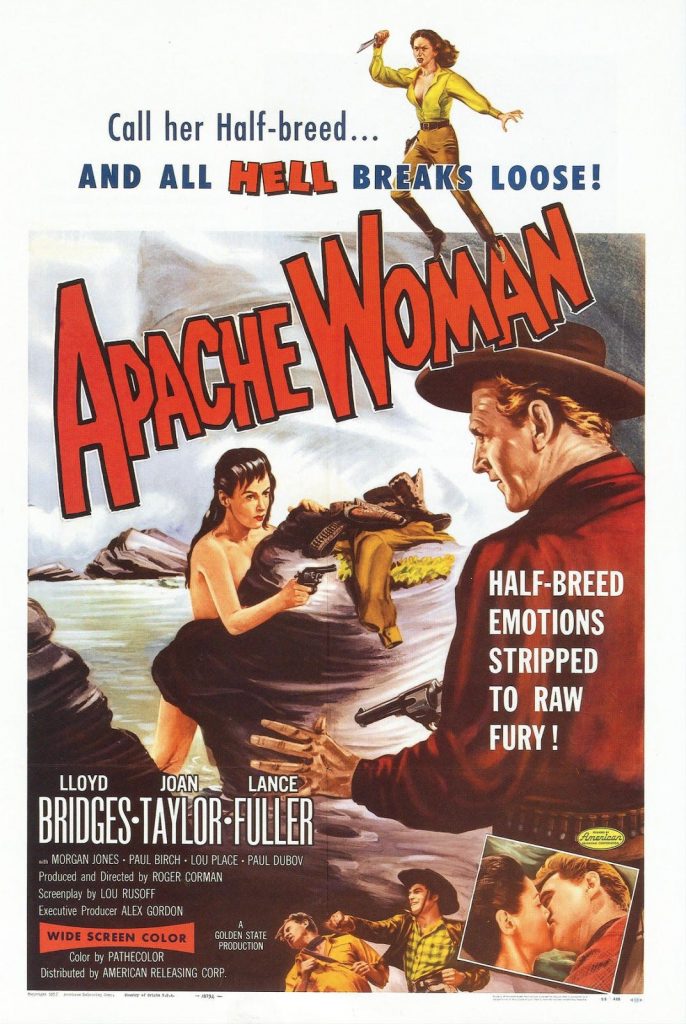 The movie starts with a street fight between a cowboy and Anne LeBeau (Joan Taylor) who is half Apache, half white. The fight is about the white town people blaming the Apache for the various crimes in the area. By watching this scene, I know why I’m watching a Roger Corman movie. I’m not an expert on Roger Corman movies, but I think he is always trying to make his movies different from other movies by doing scenes that no other director would do.

The theme of the film is what makes this western somewhat different from other westerns. Corman is trying to deal with prejudice between the Indians and the white people. Anne LeBeau who is a ‘halfbreed’ lives with her brother some miles out of the Apache reservation. Her brother, Armand LeBeau (Lance Fuller), is leader of a band of outlaws who are committing the crimes the Apache are blamed for. The town people want military troops from the government, but they send Rex Muffett (Lloyd Bridges). He starts an investigation, and he starts with Anne. Anne, who thinks she belongs to the Apache refuses to help him, but somehow the fall in love anyway. Rex suspects Armand, and questions Anne some more, who is now troubled by the fact that Rex might be right. What is she going to do? Betray the Apache by turning her brother in? Or be responsible for a war between the Apache and the white men, by protecting her brother. This is an interesting notion, but I think it’s poorly played out in the film. At the end Rex and his men are trying to ambush Armand and his men. It ends in a plain ol’ shooting festival with Rex and Armand in a fist fight, with Armand falling off a cliff. I think Corman could do a lot more with the theme in his film. By showing more of the tension between the Indians and the townspeople, there would be a lot more tension in the film, and then we could understand better why Anne has such problems. I think the story is OK, the acting is OK (Lance Fuller does a great job at playing Armand LeBeau), the casting is OK, everything is OK. That makes it a very dull movie. It had potential, but in the end it turns out to be just another Hollywood western.