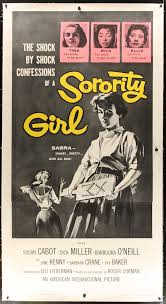 SORORITY GIRL originally played as a double-feature with MOTORCYCLE GANG, and that film is also recommended.