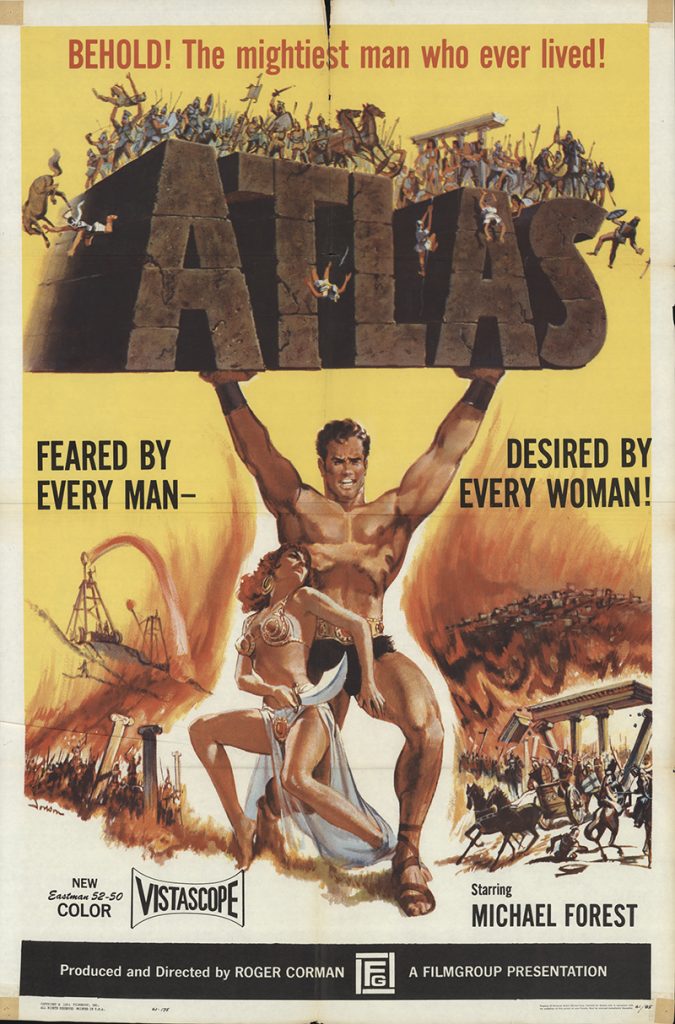 In the early to mid-1960s, there was, believe it or not, a major craze for films set in the classical period starring such heroes as Hercules and Maciste. They were churned out by the dozen by the Italians and they made a butt-load of money throughout the world. So much that American director Roger Corman decided to try to get in on the act, though he never made much of an impact on the genre–and after seeing this film, I could see why.

Here, Michael Forest stars as ‘Atlas’–a guy who is pretty much like the other muscled heroes of the era (such as Steve Reeves and Peter Lupus). And, like many of the films, he was an American playing lead and the rest of the cast were mostly Italians–especially the extras. In this case, however, more of the supporting cast is non-Italian. Much of the dialog, then, was often dubbed.

By the way, although he was not an especially well-known actor, you may just recognize Forest as the man who guest starred on the original “Star Trek” series as the god Apollo. My assumption is that he was probably picked to play this “Star Trek” character because of his prior film experience as Atlas.

Oddly, despite the American director who was known for action and horror films, this film is amazingly low-key and a bit dull. You’d think he might have breathed some life into the films, but for the most part, the film is just another tepid action flick–with hardly any action. The costumes aren’t especially good and the cast seems tiny–even for a sword and sandal epic. If you note the trivia for this film, you’ll see that Corman’s original army of 500 extras ended up being, at most 50 through no fault of his own and as filming continued the numbers dwindled. Yet, believe it or not, this tiny cast isn’t unusual, as I’ve seen several films not made by Corman in the genre that had equally tiny “armies”. A great example is the rather silly film “Maciste vs. the Moon Men”.

By the way, I am one of those who has marveled at Corman’s ability to do wonderful things with tiny budgets (such as “Little Shop of Horrors” and “Bucket of Blood”). He is a brilliant director, though like most, he has made his share of disappointing films. This one, clearly, is among his worst. This isn’t just because it’s silly, as I LOVE his silly 1950s horror films, but because the script is so lifeless. It practically puts you to sleep because you keep expecting action and excitement but it just never delivers. Frankly, I wish it HAD been cheesy and silly–that at least would have made watching it fun! As far as fun or funny goes, I had to take what I could find due to bad dubbing. A funny aspect of the film you should look for are the dubbing mistakes. First, there were the trumpeters. When they blow on them, you hear NOTHING–as they apparently forgot to dub this! I especially loved when the boss-man ordered a fight to the death to begin with the blowing of the trumpets. You see the guys blowing away…and absolutely no sound at all!! Yet, miraculously, the guys begin fighting! Another scene consists of dancing girls flitting about…and absolutely NO music!!!!