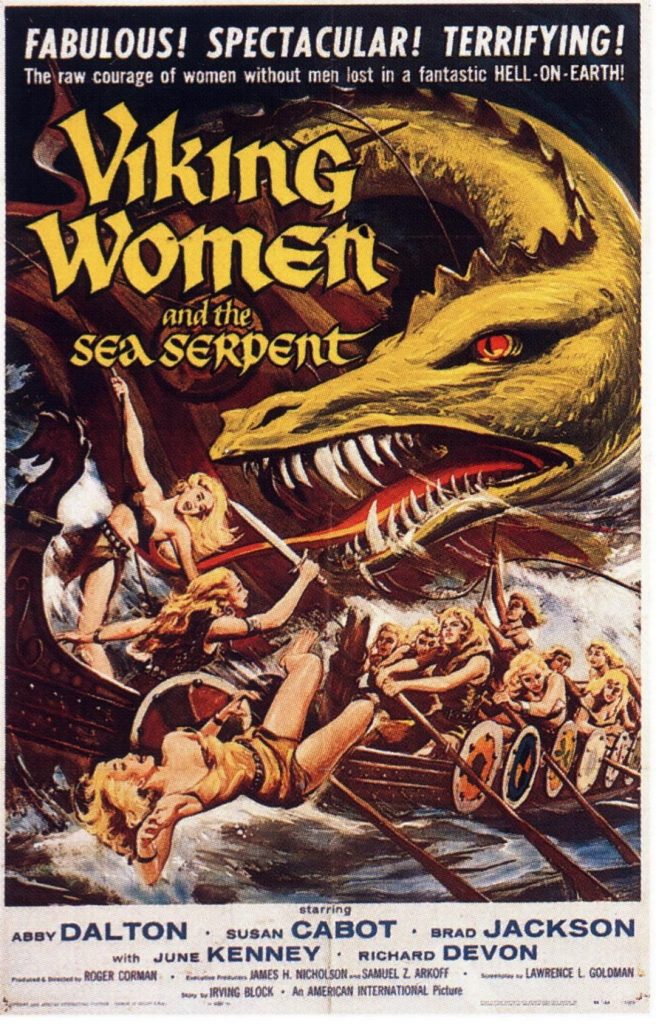 Roger Corman has been in the movie industry for years. This movie was made in the 1950’s and he is still making movies today! Typically, he does movies of lower quality and low budgets, I think his best time came in the late 70’s and early 80’s as during that time he made some of the coolest horror movies around. Chock full of gore and nudity, but he has not made as many of those films as of late. He was basically remaking his own films in the 90’s and I cannot name anything he has done in the 2000’s or beyond. During the 50’s and 60’s he made a wide range of films from cheap horror, to caper films and even westerns. Here he attempted a viking film and this one reminded me of those Italian Hercules films in that it features a band of warriors on a quest and then they promptly get captured and then most of the film is them trying to get away from said captors. It is not one of Corman’s worst films, but definitely not his best either. A lot of the films he did during this time were full of padding, making a film that really did not have much to it and stretching it into a feature length film. Probably why he was so much better during the 80’s because the padding got a lot more fun to watch in the form of nudity and such.

The film features a band of viking women casting votes on whether they should head out to sea to find the missing viking guys. They end up going and they start the trip in glorious fashion losing the boats rudder right off the bat, though they could have simply turned the boat around and gone like 20ft to get it, they decide to try and proceed without it. A young man stows away with them, and soon starts flirting with one of the viking women. They end up attacked by the serpent of the title and soon they find themselves captured by a group with a leader draped in idiotic costumes who has a son that really does not seem like he belongs in the same film. They will discover their men have also been captured and are now these men’s slaves! These vikings are also the most clean shaved vikings I have ever seen depicted on screen.

I saw this film on Mystery Science Theater 3000, I am guessing that is how a lot of people would have seen it. That or on one of those packages of public domain films where you can get like 50 older flicks for cheap. It was a pretty good episode of the show, but not really great. Most of the good riffing came during the sea serpent attacks. I was surprised they missed a couple of jokes like the whole stowaway aspect as the boat was not a huge vessel and this guy managed to hide while one could literally see the entire boat without turning one’s head.

So, a typical Roger Corman film from this time period. I would not recommend watching it unless it was on MST3K as it just does not look like a film that is going to be bettered by seeing an unedited viewing. It was made in the 50’s after all and Roger did not make the really cool stuff till the 70’s so I think one gets a pretty good overview of this one by simply watching the episode of MST3K. The main thing that was noticeably missing was the discovery of the stowaway as one minute he is hiding under a rug and the next he is joking with the crew.