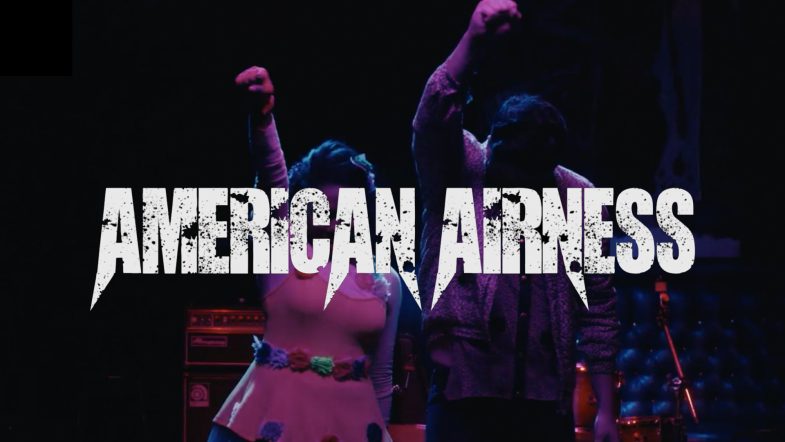 Air guitar competitions began shortly after the first guitar was made back in the early 16th century.  After working long days in the fields, peasants would gather in arenas and compete to be crowned air guitar gladiator (not really, but just go with it)!  The short film American Airness captures the modern day air guitar community and the fierce battles, all to be crowned thy Airness champion.  The film revolves around Palmer, an underemployed, overzealous 20-something who competes in his first local air guitar competition and he had to drag along his unamused big sister who is there out of pity. Palmer, the newest challenger in an underground sport filled with colorful characters and killer riffs,  enters a world where anyone can become a god of rock. Will he crash and burn or unleash his inner beast?

American Airness Executive Producer and Writer Sam Miller wrote a hilarious script that gets you into the story and characters from the first contortionistical (if that’s a word) behind the head air stroke to the last windmill limb tearing arm swing.  “We really wanted to capture what it feels like to be part of this wonderful, funny community,” tells Miller.  “It was a lot of fun writing for Olan and we’re so thankful that so many air guitarists have responded so well to the short.”  Miller has been creating his own shorts since he was 12 and produced several series while in college.  After college he relocated to Los Angeles he kept writing and wrote many shorts and he was a writers’ assistant on Desperate Housewives and for many other shows for Nickelodeon,  TV Land, and ABC. Comedy is Miller’s expertise and he worked at ABC in the comedy development department and was a staff writer for the CBS hit comedy Mom and wrote for Disney’s Just Roll With It.

American Airness stars Olan Rogers as Palmer or Thundercat (his air guitar stage name), Zabeth Russell plays the role of Palmer’s sister Catherine and Ashleigh Crystal Hairston as Ariel/Guitar Petal who is the pretty air guitarist that Palmer has a thing for.  The rest of the cast includes the emcee Rachael (Elyssa Phillips) who keeps the crowd pumped up throughout the competition, then there’s Ragnarock (Jason Shotts), the current king of air guitar who’s cockiness is very comical.

The film opens with Palmer dragging Catherine to an air guitar event. Palmer wants nothing more in life than to be accepted into the exclusive air guitar community and Catherine thinks air guitar is absurd.  As the crowd cheers on the performers, Palmer gives Catherine a lesson about air guitar and personal details of the competitors he’ll be up against. He’s very serious as he shares all the insights with Catherine and she’s constantly throwing out quick sarcastic comments that typically go over his head.  Their interaction is a true sibling rivalry and despite her mocking Palmer, it’s obvious she loves and supports him, especially since she should be home working on her thesis instead of watching air guitarists.

When Ariel comes up to Palmer it’s obvious he likes her as he nervously stumbles his speaking while babbling incoherently.  We also meet Palmer’s air guitar idol Ragnarock, that soon will become Palmer’s number one nemesis. Ragnarock is too cool for everyone and acts like he’s the cat’s meow.  Palmer initially is oblivious of Ragnarock’s cockiness, but Catherine picks up on it right away. You can sense that Catherine’s attitude is changing and her support for Palmer elevates and she wants him to kick Ragnarock’s ass in the competition. When the main characters go on stage there’s some wild, fierce, hard rocking, and especially hilarious competition.  When it comes to Palmer’s debut he struggles, but with the support of Ariel, he realizes he can’t give up his passion and that it’s a long way to the top if you want to air rock and roll.

Final thoughts: Each and every character in American Airness has a unique role that contributes to the nonstop comedy throughout the film.  The comedy is witty, relevant to the moment, and brief with no drawn out setups.  The romantic relationship between Palmer and Ariel is a cute yet funny one. Ariel is a genuine, level headed, well-educated girl with a stressful job that just loves to play air guitar on the side.  Even though Palmer is goofy and simple minded, he highly respects Ariel and it was her motivational speech that got Palmer back up on stage after he failed miserably. Of course even though she’s being serious and compassionate during her speech, Palmer in typical fashion has to make sarcastic comments to make a dramatic scene funny.

American Airness is a must see short and it’s conveniently available on YouTube: www.youtube.com/watch?time_continue=1&v=PkVhe_9rML0

0 20
Revisiting The Past…Seeing The Future