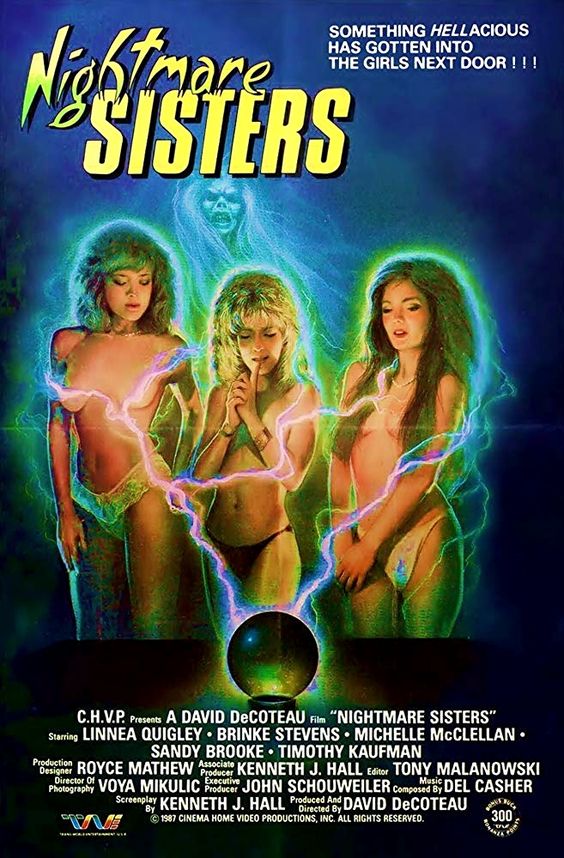 “Nightmare Sisters” is a harmless, enjoyable b-movie which is more sex comedy than horror. I don’t think it’s even intended to be scary, and there is very little violence, but a lot of nudity and humour.

The movie gets off to a shaky start with an obviously Caucasian man playing an Indian fortune teller, and doing the worst Indian accent since Peter Sellers. Why would a fortune teller be Indian, anyway? Somehow the crystal ball gets possessed, and then finds its way into the hands of three dorky sorority sisters.

These three are played by the holy trinity of b-movie scream queens, Linnea Quigley, Michelle Bauer and Brinke Stevens. They begin the movie as stereotypically unattractive college co-eds. Brinke has borrowed Jeffrey Dahmer’s glasses, Michelle Bauer is dressed up to look fat, and Linnea Quigley is wearing false buck teeth which actually only accentuate her beauty. Detractors might claim that we’re only fans of Quigley, Stevens and Bauer because they’re hot and get naked. This movie, along with most of their movies, showcases the charisma and talent they actually brought to the screen. Their portrayals here are funny and likable.

Their nerdy male counterparts come over for a party the girls are possessed when they use the crystal ball in a seance (don’t seances require ouija boards?) At first the girls turn sexy – and semi naked – but then they get a touch demonic, and a hilarious exorcist arrives to save the day.

David DeCoteau seems to me to be a rarity among b-film makers. Going by any of his recent efforts, a strong case could be made that he is the worst filmmaker who ever lived. However, watching his ’80s films like this one, one realises that he actually had some degree of know-how when he started out. I mean, obviously this isn’t Citizen Kane, but it’s actually pretty good.