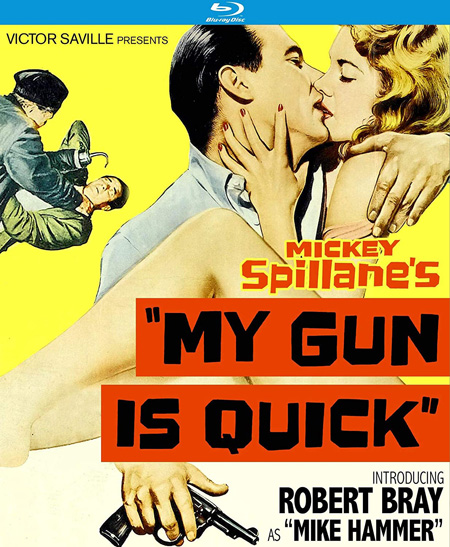 Unfortunately, Bray’s bland version of iconic Mike Hammer can’t hold together an over-extended 90-minutes. I might have responded differently had the actor evinced more than one emotionless expression and ditched that perfect wardrobe right out of Gentleman’s Quarterly. Then too, there’s that meandering screenplay whose threads come and go– but crucially fail to weave anything like good suspense.

Now, I’m no fan of the Cold War’s “a slug in the commie gut” Mickey Spillane, but the movie as a whole fails to project his particular brand of blue-collar gusto. And that’s despite the many half-clad babes that parade in and out. Also, looks to me like the screenplay goes awkwardly out of its way to emphasize Hammer’s principled core. That’s probably to reassure 50’s audiences that this is not Spillane’s ethically challenged version. In that sense, the movie’s a somewhat revisionist working of the decade’s favorite PI.

Still the movie manages a few positives, especially Jan Chaney’s beautifully shaded performance as a forlorn hooker named Red. It’s one of the more subtly soulful turns I’ve seen. Note too how that same opening scene registers Hammer immediately as a tough guy but with heart. Then there’s a good traveling look at LA’s notorious freeways, which must have been an early morning shoot before the system-wide jam starts. Note too,the big glimpse of 50’s upscale decor. No wonder this Hammer only parades around in fine suits. And I liked that imaginative junkyard set-up that proves even recyclables can be a menace.

What the movie really needs however is a strong touch of style. I’m just sorry proved stylists like those of of Kiss Me Deadly (1955) didn’t have a hand in this pedestrian production. As things stand, the programmer remains an appropriately obscure entry in an otherwise durable franchise.