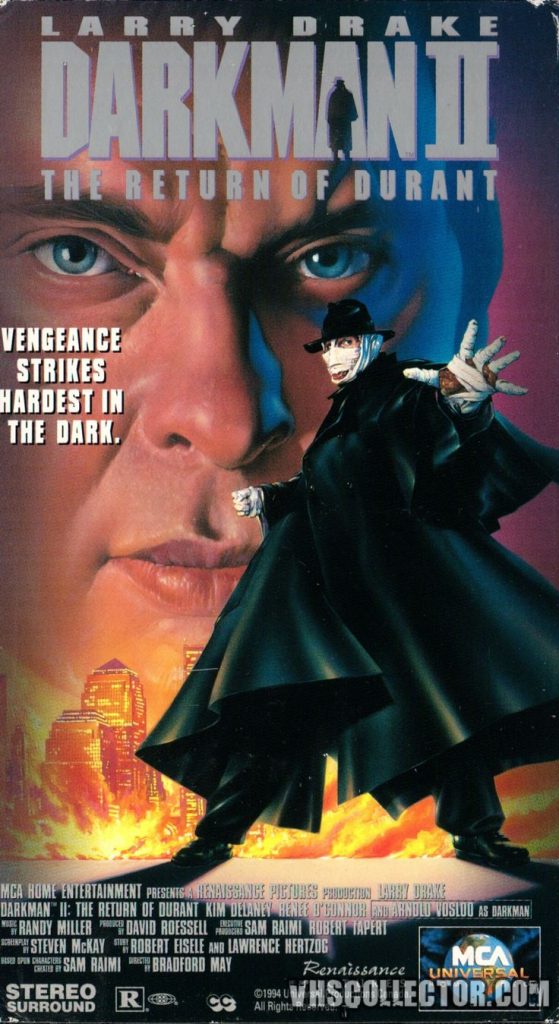 DARKMAN II isn’t as good as the first (obviously), but it’s a decent sequel despite the obvious: there’s no way Durant should be able to return. He was most-assuredly fried, roasted, toasted and burned all to hell at the end of the previous film, and his return is rather laughable. The story only briefly mentions that he was in a coma since that incident, and doesn’t bother trying to come up with anymore more believable. They at least could have had him horribly scared or something, giving him a taste of what he did to Westlake.

But still, it’s fun to have him back only so we the audience that take delight in patiently waiting to see him get his at the end. He’s just as vial as he was the first time around. Arnold Vosloo takes over for Liam Neeson, and it was nice watching play the hero for a change. He did a good job. Kim Delaney is rather wasted in a part that could have been much more vital to the story than it was.

The film did a good job keeping up the feel of the original, despite lacking Sam Raimi’s added punch. It still maintains that comic book feel, with a hidden underground lair and a hero struggling with his own inner rage while trying to stop a madman. Also nice to see the film keep the original movie’s musical themes, something sequels don’t often do. There’s not as much action as the first one, and it’s not as good as the second sequel, but as a sequel itself, it’s not bad. If only a more believable explanation for Durant’s return had been given.