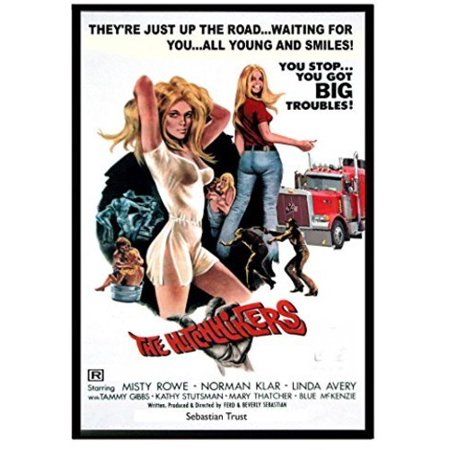 The main character in Hitchhikers is a young, unwed girl who gets pregnant by her boyfriend and then to avoid shame (remember this was a different era), she runs away from home to join a hippie commune. The commune leader, Benson, is a conniver like Manson who runs everything and ends up arranging an illegal abortion for the girl by blackmailing an unscrupulous doctor. (We get to see the shocking illegal abortion scene). Then we find out that the commune members support themselves by having the females hitchhike and flash motorists with nudity, then robbing those who stop for them. Imagine a stark naked or nearly naked girl in the road in front of you as you’re driving down the road and you’ll know why this ruse works.

The Hitchhikers pull their flash and rob scheme on mostly older men. Sometimes Benson, the commune leader, will pop out of the bushes with a gun and rob the guy or the girls will simply hop into the unsuspecting man’s car near a busy intersection and cry rape (“you dirty old man !” or “now how about another $20 for that blouse you tore ! I’ll scream !”) to blackmail the guy into forking over all his green, lest he suffer extreme embarrassment in front of a crowd.

The girls in this movie are some pretty good eye candy and sometimes you’re reminded of ‘Girls Gone Wild’ except these chics get paid by robbing you !

About the only funny line came when the crew robbed a Reverend on a rural road and left his car keys about a half mile down the road stuck to a bush, forcing him to crawl on hands and knees to retrieve the keys. He utters “Praise the Lord ! I almost got my ass blown off back there…”

There is little redeeming social value to this flick, but if you remember the seventies, hitchhiking was very big and some of this stuff like this actually went on in real life. I remember being warned about not picking up hitchhikers because of this ‘cry rape’ ruse.