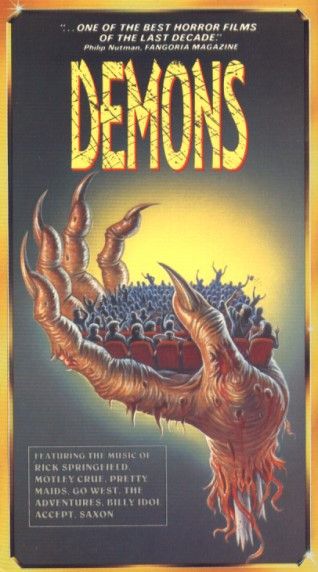 Cheryl (Natasha Hovey) is given a ticket to the new theatre called Metropol by some creepy dude (Michele Soavi) with a mask that’s a mix between PHANTOM OF THE OPERA and THE TERMINATOR. So, Cheryl takes her friend Kathy (Paolo Cozzo) so they can skip class and watch a movie. Within the theatre there is a mask that through a pimp named Tony (Bobby Rhodes in a role that is downright hilarious) and his two prostitutes Carmen (Fabiola Toldedo)and Rosemary (Geretta Geretta) we see Rosemary get cut by the mask. Uh-oh!!! Soon violent, starving demons take over the theatre by storm.

Amazingly gory and not for the weak stomached. The acting is so bad it is memorable, which is much like the film. Another funny note is one of the people in attendance at the theatre is a blind man named Werner (Alex Serra).

The demons were created by Sergio Stivaletti. The music is awesome with a score by Claudio Simonetti and soundtrack that includes Billy Idol, Motley Crue and Accept to name a few. Written by Dario Argento (who also produced), Bava, Dardano Sacchetti and Franco Ferrini. Must say it is sort of a paper-thin story, but it sets everything up nicely for the great and bloody effects done by Stivaletti.