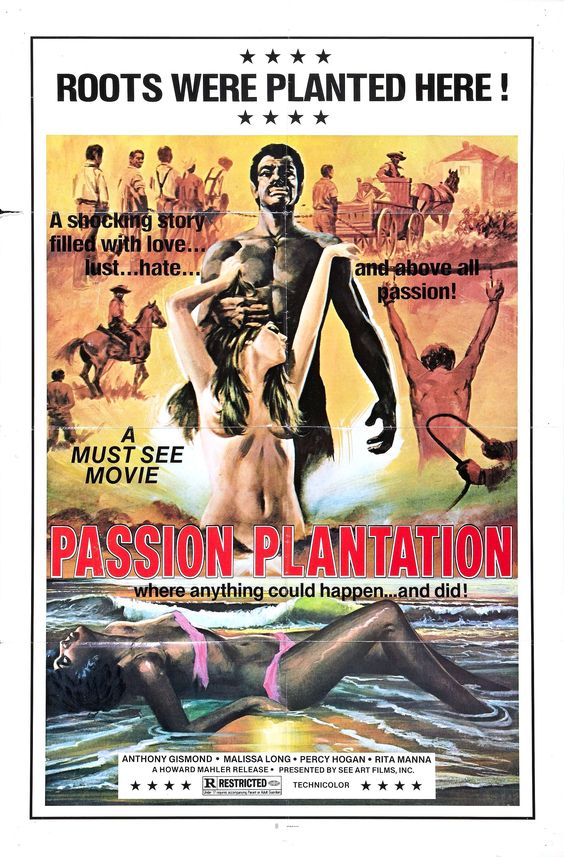 This somewhat turgid “Mandingo” knockoff by the same director who did the other principal Italian one of the era, ‘Mandinga,” certainly doesn’t skimp on the sexploitation. The plantation mistress (Emmanuelle, of course) is your standard racist, spoiled, blonde nymphomaniac who keeps seducing black “studs” then crying “rape!” and having them whipped, tortured and/or killed. This is standard stuff,

Somewhat funnier is the deadly-earnest speechifying of the hero, who starts out as her fiancé, But after a slave girl’s herbal remedy saves from from a snake-bite death, he is “born again” as an ex-racist. He and the slave girl (whose middle name happens to be…Emmanuelle) have more of a “love” affair after that point and say ridiculously lofty things about foreseeing a future without prejudice. (That actually seemed more likely to happen back in 1976 than it does now.) Meanwhile the “white Emmanuelle” just continues boning every man in sight. The latter is dubbed by the same voice actress who I swear did the English-language-version dubbing for just about EVERY principal female role in Italian exploitation movie during the 1970s and 80s.

There’s some terribly silly dialogue, but despite its fairly busy pace “Passion Plantation” is on the whole too pedestrian in concept and execution to be hilariously bad. I did laugh out loud a few times, however, particularly during an incongruous quote from the lyrics of “Ol’ Man River.” There’s quite a bit of nudity; the actors are pretty attractive and were in several cases probably cast mostly for their impressive physiques. Production values are adequate for this sort of mid- 70s Italian exploitation movie, which was shot in widescreen.

The Something Weird transfer has some problems toward the beginning (for a while the framing is off, so the bottom of the screen spills onto the top), but you’re surely not going to find a better print. I thought the movie was considerably longer than IMDb has it listed as, but it turned out that in fact the SW DVD is two hours long only because there’s a couple 8mm late 60s/early 70s nudie loops at the end, “Tbe Interlude” (capturing strip acts at the titular San Francisco nightclub) and “Naked Party” (about three blonde stewardesses frolicking in a hotel room).