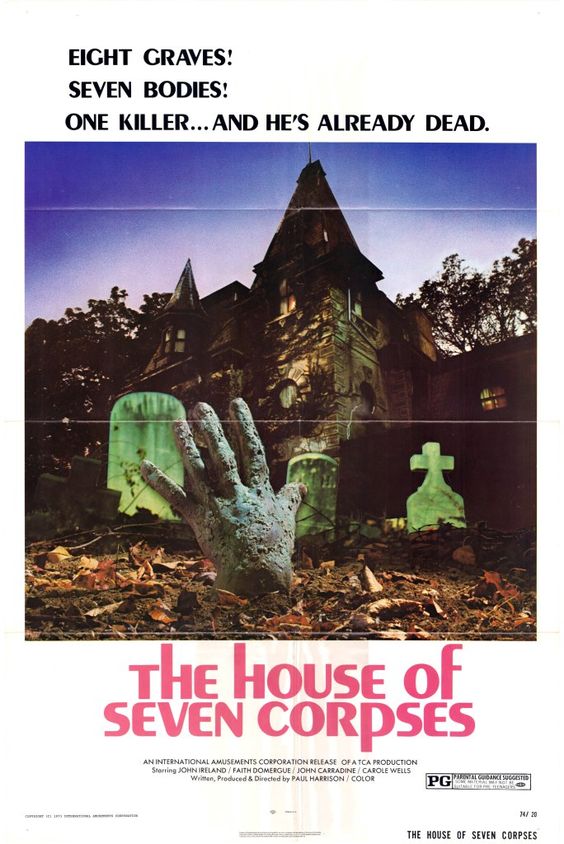 How do you not like a film that has seven murders while the opening credits are rolling? Even the fact that the director write many episodes of the Saturday morning kids show H.R. PUFNSTUF does not detract from the fun (remember that DUNGEON OF HARROW was directed by the man who drew “Howard The Duck”). The film-within-a-film idea was used to great advantage in FRANKENSTEIN 1970 (will someone please release that to DVD in widescreen?) and it works rather well here too. John Ireland is the hard boiled director making a movie about witchcraft in a spooky old house (actually the former Utah governor’s mansion) whose owners have all died mysteriously and whose last tenant was a real life witch. John Carradine is Edgar Price, the caretaker who knows the whole family history and is not shy about interrupting filming when Ireland gets it wrong. Faith Domergue (THIS ISLAND EARTH) is the tempermental movie star who seems to be Ireland’s now-and-then lover. Also on hand is Charles MacCauley, best remembered as Dracula from the blaxploitation classic BLACULA as a drunken has been whose career is well past its twilight. The action gets a little confusing near the end. We know that a zombie rises from its grave because Ms. Domergue has read a magic chant from the Tibetan Book Of The Dead (conveniently located on a bookshelf) but what happens with Mr. Ireland and a crew member named David is likely to get you wondering “Huh?”. Like, is there one zombie or two, and if there are two where does the first one disappear to and other nagging little things like that. Don’t let it spoil your fun though, this film is worth seeing. nobody panders to the outrageous plot, everyone turns in a good performance. John Ireland gets the most unforgettable line. About to spirit Ms. Domergue to his bedroom Ireland’s romantic plans are sunk when she insists on searching for her lost cat. Handcuffed by the PG rating Ireland barks “FRITZ the cat!” and stomps out of the scene. Fun, and lots of it.