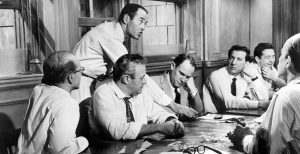 I really like writing these weekly essays. For me, it’s a way of saying thank you for the experience that is the movies. One of the things I do after writing my first draft I try to fact-check what I have written. I am sure I have made some mistakes after writing 272 essays, but I always try to check facts to make sure that what I am writing is based on facts. This week I started looking over the internet to see where money is being spent on social media in regard to promoting movies. I was shocked; 87% of all the ads were leading the consumer to stream and not movie theaters.

I thought it would be maybe 50/50 but it was not. The top ten graphics on the Google header were all movies that came out solely on streaming or had a quick, poor play in the theater,

I think we should all step back from this information and ask ourselves, what is the current state of the movie ecosystem? It is a Hollywood movie cliche, but I do think it carries a deep truth, you have to follow the money to find the truth. Social Media is not some collective vision evoked on the internet, but it is a manipulated expression on how much someone spent trying to publicize something. From the data I am seeing expressed, it is obvious that Netflix is spending like a drunken sailor.

My friend Ellen Zavian, a Law professor, journalist, and sage giver of advice shared a rather unsettling yet profound article with me that was published by the online journal, the Visual Capitalist, and was written by the researchers at streamonomics.purely.capital. This is information all exhibitors need to know.

In regards to new products intended solely for SVOD service, well that’s a staggering $149 billion a year led by Disney+, Warner/Discover, Amazon, and Amazon/MGM (that was hard to type). In 2020, an amazing 220.2 Billion was spent on the original production. Now with the lack of product hitting the theaters and that money being spent on original production for streaming it is obvious that the business of the movies has witnessed a tremendous paradigm shift. COVID changed much. Between 2019-2020, the number of global online video subscriptions increased by 26%. In addition to subscriber-based advertising, video on demand (AVOD) platforms—which generate revenue through ads instead of subscribers are also gaining popularity. Some of these ad-funded services have built up larger audiences than their SVOD counterparts. For instance, IMDb’s free platform IMDbTV has a whopping 55 million monthly active users; these numbers blow Hulu out of the water.

There is a new dynamic at play, television is becoming the movies. The Mandalorian’s first episode cost $13 million smackers, the second show cost $16.3 million. As an aside, the budget for the original Star Wars movie would be $44 million in 2021. As more competition enters the streaming market, producers are facing pressure to up their production value so they can keep their audience’s attention. In other words, because the streaming war is really heating up, the stakes are getting higher, the cost of production is rising.

In 2020, the budget for an average TV series in the U.S. was $59.6 million, a 16.5% increase year-over-year. One of the most high-cost TV shows last year was WandaVision, a series that cost Disney approximately $200 million (which breaks down to around $25 million per episode). The average cost of a theatrical movie is close to $100 million.

As series budgets rise, the line between film and TV has started to blur. This is a problem, a deep problem for cinema; not only is Hollywood blatantly favoring the streaming medium it is taking all it knows that used to be used for thrilling audiences on the big screen is now applying these tools to the small screen.

These are cold and cruel facts for the business of exhibition. A natural ecosystem makes sense to me but obviously, the juggernaut that is streaming cannot be slowed even if Hollywood wanted to. I believe that COVID put a deep scare into the motion picture business and I firmly believe that Hollywood, without telling anyone, is putting all its chips in the streaming basket. I think the expenditures on social media are an example of what is happening, and the no-holds spend crazy strategy that Netflix is espousing is another. People follow the money, but in the long run, they are making a huge mistake. For a movie to have any endurance in the market, it must first be on the big screen. In the words of Barry Diller, from an NPR interview “These streaming services have been making something that they call ‘movies,’” he said. “They ain’t movies. They are some weird algorithmic process that has created things that last 100 minutes or so.” He goes on to say “The movie business is over… The movie business as before is finished and will never come back,” Diller told NPR on Thursday. “I used to be in the movie business where you made something really because you cared about it.”

Last weekend, “Black Widow” did $80 million gross in theaters which netted Disney a gross of $48 million, supposedly it did $60 million on Disney+. Guess which number Disney likes the best.

Streaming is not a Panacea, it is a crowded market where every movie and every platform is beginning to look the same. Realize what streaming is doing and program against it. Care about movies, grow movies.